“Anyone here know Bethesda Fountain?” Phil asks the gathered group of men (and one woman). “The statue is known as the Angel of the Waters, and its sculptor happens to be our first lesbian artist on the tour.”

A few mumbles and handful of thoughtful nods as Phil continues talking to us about Emma Stebbins. Sculpted in 1868, the Angel of the Waters was the first major artwork commissioned to a woman by the City of New York. Born and raised a woman of means in the 1800s, Stebbins was sponsored by her brother, Henry (then head of the NY Stock Exchange), to study art in France and Rome. On her European tour, she fell in love with actress Charlotte Saunders Cushman, who reportedly modeled as the Angel.

Unlike the other, newer graves in the family plot, Emma’s is white marble but you’d never know it, so weathered and grey and green. Her name is hardly visible. “I hope someone takes it upon themselves to help restore her grave,” says Phil before ushering us onward.

As far as cemeteries go, Brooklyn’s Green-Wood Cemetery is grand and welcoming. Sprawled out over 427 acres, it is damn-near parklike, if you ignore that hundreds of thousands of New Yorkers lying beneath your feet. On this day, probably fall’s last “nice” weekend day, it is especially glorious. Between the bright flashes of the green Monk parakeets acting sentinel against wayward pigeons and Richard Upjohn’s Gothic Revival gates, the urban cemetery eats up all unnecessary sound, instantly a quiet reprieve from urban Brooklyn.

The sun is big in the sky, with the storm clouds from the day prior long gone. The fallen, dying leaves (appropriate, I thought) crunch heartily beneath our feet, but the verdant canopy of trees defy the slow march into autumn. “We’ll die on our own time,” they seem to say.

The aptly named Green-Wood is in fine form. If nothing else, it gives good face. Sure, we’re committed to three hours of walking hillocks and knolls, but small price to pay to soak in history in what was once Brooklyn’s top tourist attraction.

In my revery, I overhear a quite-alive Phil contributing a few more facts about Ms. Stebbins. I half-listen as I navigate a clumsy hill-to-cobblestone situation. 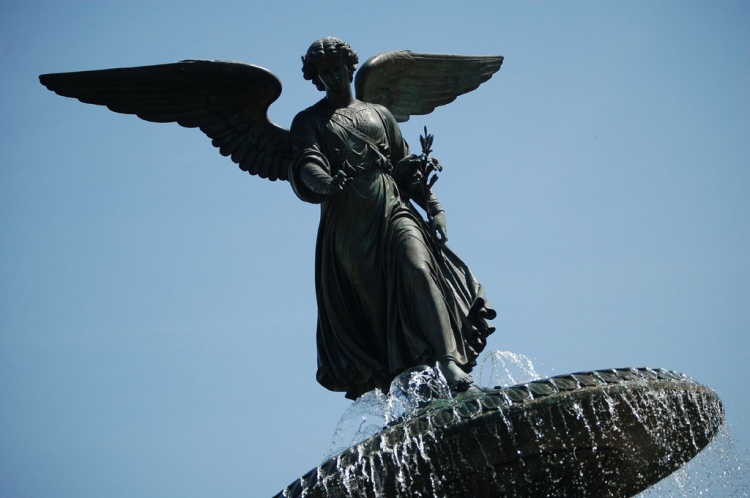 In all my time in NYC, my big cliche love, my connection point to the city, has been Bethesda Fountain. The iconic, powerful celestial being was first introduced to me via a dear friend through Angels in America. In all this time—even with Google and the Internet—I had no idea that a woman, let alone a lesbian, was behind it. Mind blown, heart lifted.

This is my second jaunt through the cemetery, and (independently), my second time with Phil as a guide. Ian and I walked with him, the proprietor of Walk About New York. Our first tour took us on a history’s mysteries tour of Greenwich. Taking in what is still one of the city’s great neighborhoods, I learned loads, not the least of which was discovering where Judge Judy used to live.

But I digress. This tour is Phil’s second go at his Gay Graves tour of Green-Wood, the first of its kind through the cemetery. Unfortunately, the last will be held October 12, though I imagine this is merely a seasonal concern. (Stay tuned, as they say.)

Most importantly, there is chance to connect to a community I often find myself on the outside looking in. As millennial gays, Ian and I aren’t necessarily the most “with it” with regards to current LGBT zeitgeist. Drag Race, gay bars and Pride parades? Not us.

Taken at face value, we’re not great at being modern, city-livin’ homogays, but hey, we’re fine with that. We live our lives outside most of the gay “community.” Then again, find us cool people to hang out with and I’ll show you what community can actually be.

This said, we’re sluts for trivia, knowledge and facts, and this Sunday adventure—with other like-minded gays and allies—promised all of the above.

Phil—incredibly knowledgeable about both the denizens of Green-Wood and the cemetery’s own lore—knows his stuff. Phil led us through many a winding path and hill. He took us to the graves of Paul Jabara, writer of It’s Raining Men, Brooklyn native and staunch AIDS activist; Leonard Bernstein, famed American composer of West Side Story and On the Waterfront, amongst others; and even (straight) iconoclast, Jean Michel Basquiat.

At the grave of Dr. Richard Isay, Phil choked back a few tears, clearly moved by the late doctor’s work in psychiatry, eventually butting heads with the American Psychoanalytic Association and its discriminatory policies against homogay analysts, teachers and in short, homosexuality itself. A stark contrast against “the villain of the tour,” in Phil’s words: Eli Siegel, a poet who started the Aesthetic Realism movement and foundation, the country’s first ex-gay oriented organization.

In a blink, the tour winds down quicker than expected, though the low-hanging autumn sun has us believing otherwise. One last look back at the guardian-like trees, and a quick thanks sent to each of the men and women who paved the way for 2014 to happen, and we were back in the land of the living.

Photo courtesy: Angel of the Waters by Qabluna | Flickr

One thought on “Visiting Gay Graves at Green-Wood Cemetery | Brooklyn”