A look at the stuff that’s fueled my week, published  occasionally or whatever, don’t judge me.

Confession: I’ve been working on this thing–whatever this thing is–for about two months now.

I just let myself become one of those writers, stewing and marinading and sous vide-ing over a bunch of ideas. (Just look at my Notes on my phone. It’s like the Magna Carta of gibberish.) Oof, amirite?

Though the concept of these posts is straightforward enough — “stuff I like!” — I’ve been roundabout and ultra-picky, reading tons and listening to hours on end of podcasts, watching everything recommended to me, tasting everything from shitty apple whiskey to transcendent duck tart. The stuff people make is just so shiny and wonderful (most days).

So I’m finally just gonna twist open the spigot, once backed up with excuses, to finally publish something here. Enjoy or whatever. ¯\_(ツ)_/¯

It’s spring-ish, still, and the farmers markets are heaving with the weight of strawberries. In a herculean effort of self-care, I’ve been avoiding my usual breakfast sandwich fix for a bowl of sharp Greek yogurt with a melange of berries, local honey and bee pollen (allergies are a bitch) and some muesli. So far, so good.

I’m way behind on Sense8, which is all the more of a shame, since it’s now canceled. The two seasons that do exist are thrilling and fast-paced and charming, but it’s also such a testament to the power of diversity and humanity. I’ve been thinking a lot lately about the definition of family, and this show is a glorious celebration of the families we choose to create for ourselves, in spite of what the world throws at us. I don’t know why I didn’t watch it sooner, but I’m already regretting its loss.

Thank you for being a part of our journey. Sensates forever. pic.twitter.com/SClwiY3rwy

I’ve been a subscriber to the Song A Day newsletter for a while now, and it’s been usually hit or miss. Somethings just don’t land for me, but that’s ok. In my dotage, I’ve lost the desire to seek out new music, so I like when people just send it my way. And boy, did I need today’s song. It’s by Tom Rosenthal, a musician who has apparently made a name for himself online in a big way, and the song is the title track off his new album. Simple and optimistic, Fenn is the kind of indie song a younger, simple and optimistic version of myself would’ve loved (hello, Garden State soundtrack).

Fun story: At 31 years old, I’m considering therapy for a kind-of growing anxiety problem. Last I went was over a decade ago, to some sheisty Christian family fucker who, long story short, didn’t really help. Can I get an amen for honesty and newsletters, though? Like above, an email landed in my inbox today that I needed to read, a day after a convo between myself and my friend Emily. My main problem of late has been impostor syndrome, which seems, I don’t know, so self-indulgent of me. In his “It’s My Stupid!” email, Tyler Coates (an editor at Esquire) wrote:

It has been hard for me to take compliments lately. My friend Jami gave me a really good one recently, which was that I have come a long way since the time she first met me seven years ago. “You were just an office manager at a startup, and look at you now!” That is one of those objective truths that I try to remind myself whenever I’m feeling low or unaccomplished, that my station probably seems much more impressive to everyone else than it does to me. Which is the crux of it, too, I guess: I have managed to meet other people’s expectations, but I can’t meet my own. Likewise, I cannot listen to my own affirmations when I believe, to my core, that I am just lying to myself.

Which, like, is kind of my deal right now? IDK, the whole thing just seemed very timely, considering my grappling.

I got to puppysit my good friend Wendy’s moosh, Luke, for just under a week. He likes to lick my knees and has the worst breath, but he’s a good boy. 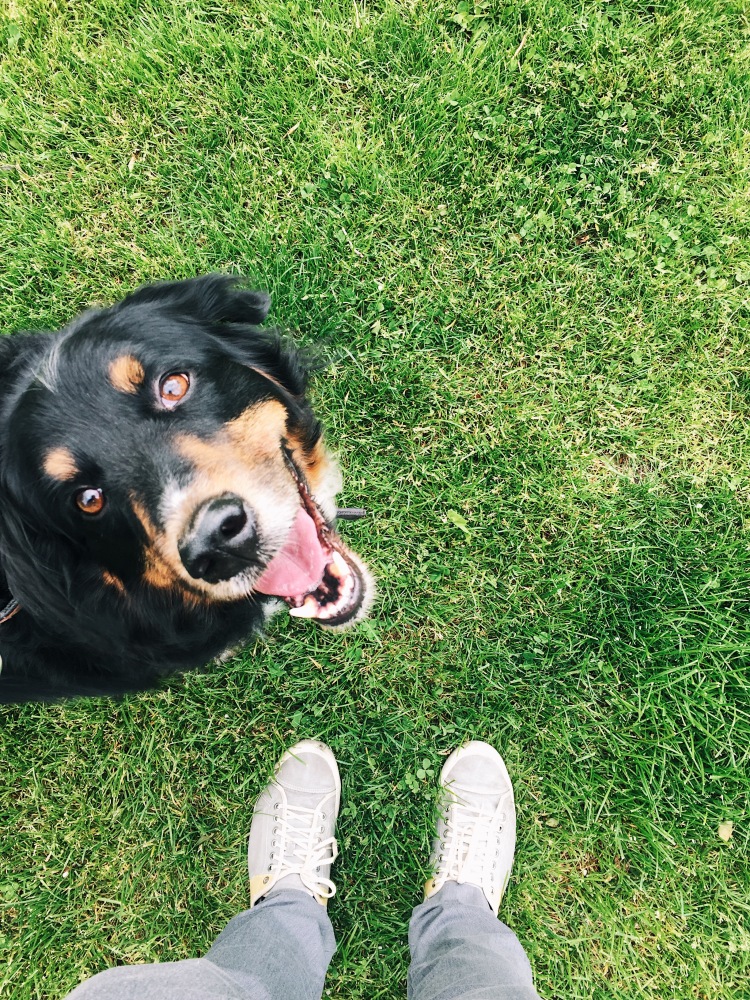 //BONUS:  Preorder the reprint of first issue of the zine, Do What You Want, co-produced by Great British Bake Off contestant/bad ass, Ruby Tandoh. It’s all about mental health and stories, filled with wonderful people like Heather Havrilesky, Mara Wilson, Diana Henry, Tejal Rao, Meera Sodha, and Tandoh herself.